No Common Faith Among Us
James V. Heidinger II

From the very beginning, the ministry of Good News has been focused on theological and spiritual integrity. The concern that Charles Keysor addressed in his “Methodism’s Silent Minority” article which led to the launching of Good News magazine in 1967, was that a group of Methodists—and their theological commitments—were being overlooked, even marginalized, in the Methodist Church. He called those folks “evangelical,” or “conservatives.” His favorite term was “orthodox.”

According to Keysor, orthodox Christians “believe that the Christian faith is comprehensively declared in Holy Scripture and is succinctly summarized in the Apostle’s Creed.” At the heart of this “orthodox” faith, wrote Keysor, are foundational doctrines such as scriptural authority, the virgin birth of Christ, his substitutionary atonement, his bodily Resurrection, and his eventual Second Coming.

Actually, these doctrines are at the heart of what many of us would call “the faith that was once for all entrusted to the saints” (Jude 3b). These foundational truths were no doubt what Paul had in mind when he charged Timothy, “Hold to the standard of sound teaching that you have heard from me” (2 Timothy 1:13). These doctrines are essential to the health and vitality of the Church.

This may be why I felt that the Denman Lectures at the recent Congress on Evangelism were so very timely. Dr. William J. (Billy) Abraham, who is the Albert C. Outler Professor of Wesley Studies at Perkins School of Theology at Southern Methodist University, spoke warmly of his enormous appreciation for Dr. Outler, his great scholarship, and his love for Christ and the Church. Abraham admitted that he owed his own passion for Wesley studies to Outler.

Having said that, Abraham stated that the time has come for the “painful” task of critiquing Outler’s theology and methodology. We must come to terms with “the stark reality that lies at the core of Outler’s work.” He went on to say that the form of Methodism constructed under Outler’s tutelage and watch “is that form that has suffered drastic decline over the last 40 years.”

Abraham says that Outler’s methodology is “superficially attractive but ultimately disastrous for the theory and practice of evangelism.” That strategy was: “Develop a vision of the core of Christianity and then express that within the conceptual and intellectual norms of the host culture.” The problem with this, however, was that the “Christian gospel and faith are made hostage to the host culture.”

After examining the serious weaknesses of this methodology, Abraham concludes that the overall outcome of this approach over forty years can be stated simply: “The Church becomes an endless seminar in search of elusive and ultimately unattainable truth, rather than the carrier of the rich and salutary faith once delivered to the saints.” He went on to conclude, “Any effort to have a concerted, church-wide, united practice of evangelism is doomed to failure because there is no common faith” (emphasis mine).

This is a sobering reality. Good News has been trying to address and help remedy this theological malaise for nearly 42 years. The United Methodist Church seems to have “no common faith.” Oh, we have it in our Book of Discipline. But in our seminaries, pulpits, and publications, we’re all over the place. From 1972 until 1988, we did our best to make this a virtue, affirming it as “theological pluralism.” While this term was excised from the 1988 Discipline, many still embrace the concept, applauding our “diversity.”

The United Methodist Church struggles today because it has “no common faith.” Unfortunately, United Methodism probably has several different varieties, something St. Paul would not have allowed—nor John Wesley. Paul excoriated the Galatians for turning to a “different gospel,” and then repeated his anathema: “I said it once; I’ll say it again: If anyone, regardless of reputation or credentials, preaches something other than what you received originally, let him be cursed” (Galatians 1:6-9, The Message).

A decade ago, Christianity Today carried an important new statement, “The Gospel of Jesus Christ: An Evangelical Celebration.” It was the work of a drafting committee of respected evangelicals such as Thomas Oden, J.I. Packer, Timothy George, and Maxie Dunnam. In the statement’s Preamble is this refreshingly bold affirmation: “This gospel is the only gospel; there is no other; and to change its substance is to pervert and indeed destroy it.” David Neff, executive editor of Christianity Today, writing for the drafting committee, said they realized that the “biblical understanding of the good news is, first, the most important thing that we can offer friends….and, second, the only thing in which we can find true unity.”

If we are to see an end to four decades of decline, this is where we must start. It is this gospel, not any other, that we United Methodists are expected to believe and called to proclaim. 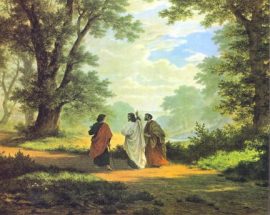